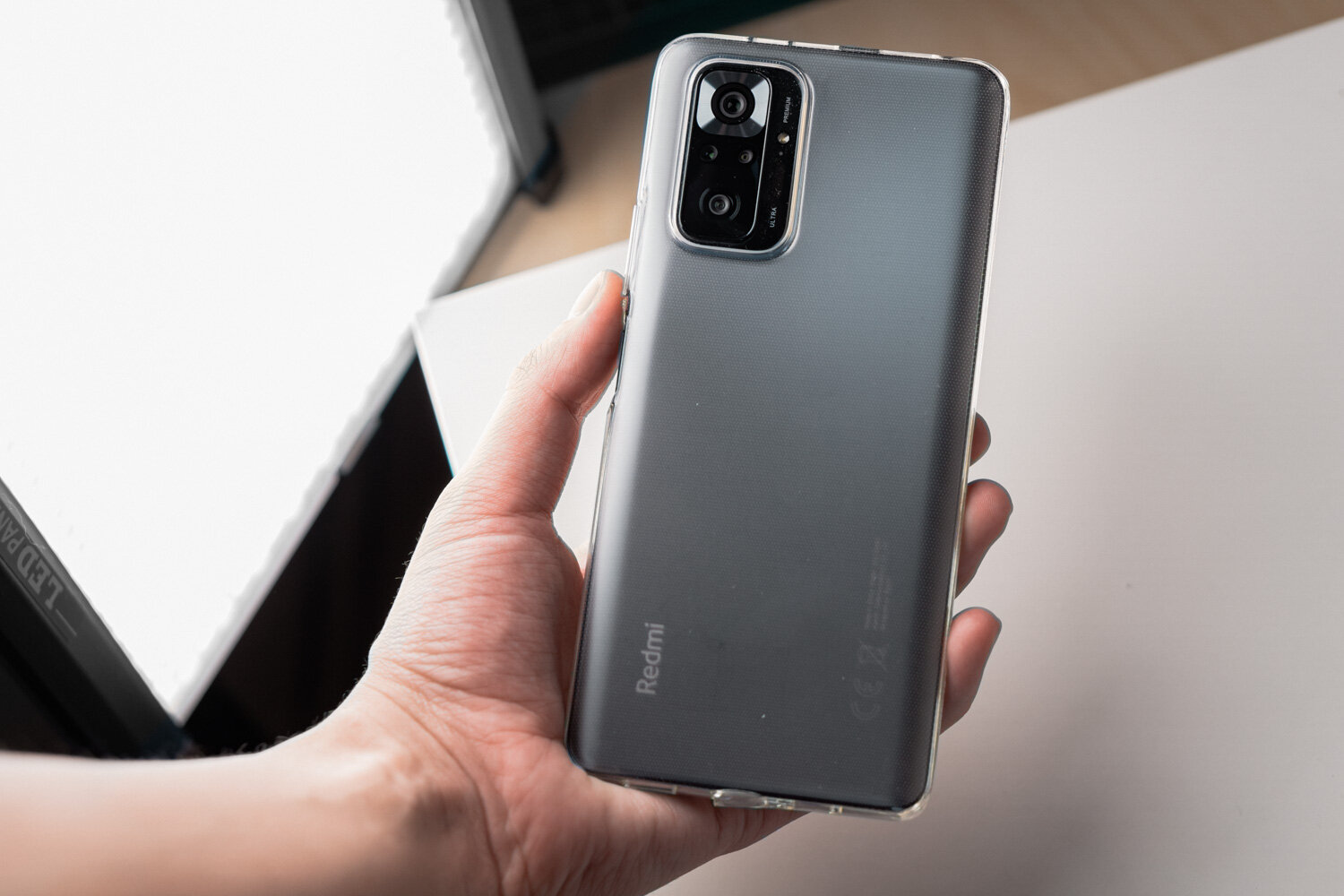 The phone boasts a bright AMOLED screen, a capacious 5000mAh battery, a smart fingerprint scanner and is compact by today’s standards. The new product has the same camera like the popular Poco X3 Pro smartphone.

Bundled with Xiaomi Redmi Note 10 smartphones, the buyer will find instructions, a type-c cable for charging and transferring files, a silicone transparent case, a paper clip for ejecting the tray a charger with fast protocols. The maximum declared the power of the charger is 33 W. In half an hour, the battery gains 64% of its capacity, and in 1 hour, 15 minutes – 100%. That is just 7 minutes longer than the Poco X3 Pro charges.

The body of the smartphone Xiaomi Redmi Note 10 is made of plastic. The diagonal of the screen is 6.43 inches at a resolution of 1080 * 2400. So you can AMOLED matrix with a frequency of 60 Hz, and the touch (to the touch) is 240 Hz. Gorilla Glass 3 is used to protect the screen from mechanical damage.

For AMOLED screens at an angle, a drop in colour rendition is characteristic. White starts to blend in with other shades, so after the IPS screen, be prepared for that.
Brightness is enough for comfortable use in the sun.

Measurements were carried out at minimum, average and maximum brightness levels. In the current firmware version, there is no DC dimming in the settings, which Xiaomi itself invented to reduce the load on the user’s eyes. The smartphone will receive the 12.5 updates, will implement the function there. In the meantime, it remains only to use the Oled Saver application.

Together with NFC, the manufacturer decided to remove the notification indicator. The speaker is loud, the interlocutor is heard well. Sometimes you even need to make it quieter.

There is a whole tray for two sim and micro sd memory cards—all as we love. Protection against water and dust according to the IP53 standard. Therefore, a sealing rubber is installed on the tray. The manufacturer has placed a power button with a built-in fingerprint scanner and a volume rocker on the opposite side.

The back cover is made of plastic, unlike XIAOMI REDMI NOTE 10 PRO. The camera block consists of 4 modules. Central- 48 Mp, width – 8 Mp, for macro and scene depth analysis – 2 Mp. The Ultra-premium lettering with a red dot looks cheap. The Poco X3 Pro installed the main module Sony IMX582.

At the top, Xiaomi engineers placed an infrared port for controlling equipment and a speaker. The second one is at the bottom. The speakers are loud, the sound is good.

The Xiaomi Redmi Note 10 smartphone runs on Android 11 and the MIUI proprietary shell. The current firmware version is 12.0.5. Changing the region to Singapore removes the limitation, and we get louder audio through headphones and stereo speakers.

Xiaomi has always filled the system with ads that you can turn off in a couple of minutes. In addition, there are branded apps and a couple of casual games that you can uninstall at any time. You can record calls, but after pressing the corresponding button, both interlocutors will hear a warning.

Xiaomi can enable the Always-on display function in Xiaomi Redmi Note 10 in the developer menu, but now it is very greedy and drains the battery quickly. It remains only to wait for the optimization as with dc dimming. Applications that you do not need but can not uninstall without root rights can uninstall a computer through the LADB application.

The Snapdragon 678 processor is responsible for the performance and sent the Adreno 612 video accelerator to help it. In Antutu 9.05, the smartphone is gaining 272,000 points, which is the average result for today. In the single-core Geekbench test, the smartphone scored 2458 points, and in the multi-core test – 6532 points.

Redmi Note 10 has 4GB of RAM and 64GB of UFS 2.2 internal storage. The Wi-Fi module is installed dual-band. As always, at 5 GHz with a tariff plan of up to 100 Mbps. The average speed is in the 84-89 Mbit / s corridor. The processor loses performance due to heat. The system has security keys and Widevine L1 so that you can watch Netflix up to 4K resolution. The smartphone quickly catches the GPS signal, and the connection is stable.

The Xiaomi Redmi Note 10 smartphone has a 48 MP Sony IMX582 main module. As with the Poco X3 Pro, in sufficient daylight or artificial lighting obtain the good quality shots. In low light, noise appears in the frame, and details disappear. Video stabilization is only present at 1080 30fps, and at 60fps and 4K 30fps, we get a shaky picture.
Multimedia, games, autonomy

Since Xiaomi Redmi Note 10 does not have the most powerful gaming hardware by modern standards. Only then can you get a smooth image. In tanks with high graphics settings and with disabled shadows without HD textures, we get from 45 to 60 frames, depending on the card.

In PUBG mobile, switch the settings from high to medium for a smoother picture. To drop frames in Call of Duty, you need to set the settings to no higher than average. In ordinary simple games, the user will not feel any discomfort from the gameplay. The screen in the camera area gets warm during gameplay.

Through the official youtube application, plays the video smoothly only in 2K resolution and below. Stuttering and dropped frames occur during 4K playback. But the resolution of 2K and even 1080 with such a diagonal is quite enough. Test watching TV channels in the IPTV Pro application. The main thing is to find a working, self-updating playlist. You can load the media and switch usually. Large files with enough seeds and internet speed are downloaded instantly.

The autonomy of Xiaomi Redmi Note 10

The autonomy of Xiaomi Redmi Note 10, then a 5000 mAh battery lasts for two days when used. In Call of Duty, at maximum screen brightness and 4G, 18% of the charge disappears in an hour. According to the same scenario, it took 5% when watching YouTube, and discharged up to 50% in 8 hours and 50 minutes. As a result, you can watch youtube at maximum brightness for up to 17 hours, which is fantastic. App usage statistics are incorrect, so refer to the indicators on the screen.

If the Poco M3 was ready to forgive the lack of NFC, then in the Note 10, it is unacceptable for that kind of money. The presence of PWM and the absence of DC dimming in the current firmware version, so you can now use the Oled saver app as a crutch. Video stabilization only at 1080 30 frames.

The advantages include a capacious 5000 mAh battery, which takes a little over an hour to charge, and compactness by today’s standards. The smartphone seemed light after the Poco X3 Pro. With sufficient light, the camera usually shoots. The fingerprint scanner is fast and smooth.

Samsung smartphones are the most popular in the world, but Apple leads the 5G market