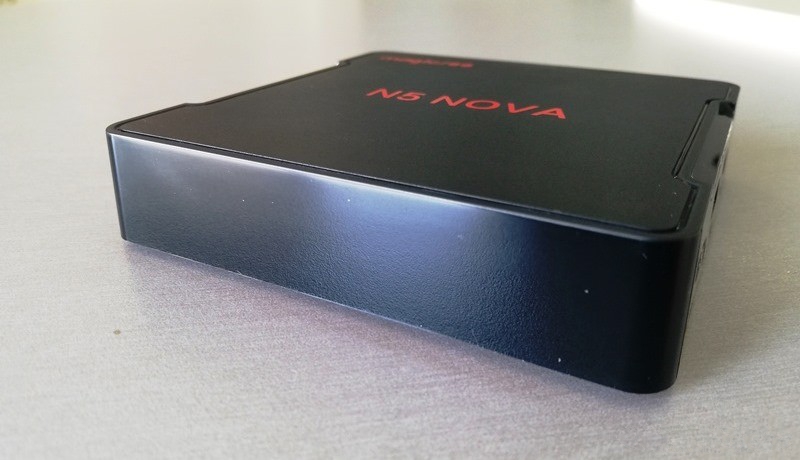 Magicsee N5 Nova is the new Magicsee set-top box model with the new Rockchip RK3318 SoC. Its a slightly improved version of the RK3328 SoC. The novelty is notable primarily large amount of RAM and internal memory – 4/ 64 GB, as well as its remote control G10 with integrated gyroscope and microphone. The Magicsee N5 Nova belongs to budget models. Let’s get in to other details of this device and check how it works and behaves during testing.

The Magicsee N5 Nova is based on the SoC Rockchip RK3318, an ARM-based quad-core processor that uses Cortex-A53 cores with a clock frequency of 1.5 GHz.

The prefix comes in a regular cardboard box, like most Chinese consoles. On the box is a color image of the console and the 4K Ultra HD logo.

At the bottom of the box is a brief specification of the console. Inside the box, all accessories, including the set-top box, are packed in plastic bags.

The remote control (model G10 ) operates at a frequency of 2.4 GHz through a special USB adapter and in the infrared range to turn on the set-top box. The multifunctional console – in addition to the traditional controls, supports the functions of an air mouse and voice search.

It requires to insert the USB receiver into the USB port on the TV box. Voice search works very well, recognizes voice commands without problems. Just press and hold the button with the microphone symbol and say the command.

This starts the Google voice assistant, which understands many commands. It’s quite problematic to determine the necessary buttons that are in the same plane and practically do not stand out.

The new TV Box has a square case made of matte black plastic. Size is quite compact: 13.40 x 13.40 x 2.50 cm. Weight is only 170 grams. On the top panel of the TV box there is only the Magicsee logo and model name: N5 NOVA. The side surfaces of the case are glossy, made of translucent plastic.

On the front panel there is an LED screen that displays the current time, network connection status and the presence of connected drives and an operation status indicator.

On the side there is a microSD card slot, a USB 2.0 port and a USB 3.0 port. Using USB ports, you can connect various devices to the TV, such as a USB drive, keyboard, mouse, or gamepad. But it should be remembered that when using a standard remote control, one port will always be occupied by its USB adapter.

On the rear panel there is a network LAN port, an analog audio / video port, an audio output optical SPDIF, HDMI 2.0 and a power port.

The bottom cover has a number of ventilation holes and a hole for the reset button, but as it turns out later, there is no button there, because it is located behind the AV connector. Also on the bottom cover are glued four rubber legs, well holding the console on the table.

The set top box is ​​easy to disassemble, after unscrewing the four bolts under the rubber legs. The bottom cover is removed without any effort. The board is located “processor up”, which is good for the processor in terms of cooling.

The headache of budget consoles (except for consoles based on the new Amlogic S905X2 processors) is overheating of the processor due to poorly implemented cooling. In this case, the processor is cooled using a small aluminum radiator, which is firmly glued to the chip with glue. Later we test the effectiveness of this solution.

In our test instance, the version of the board MGCTV150-RK3318_DDR3-4bit_V1.2 dated 2019.07.19, in which some rather unusual components are applied. For example, the flash memory chip from BIWIN, and the WiFi chip is completely unknown to Sp6330. Although the motherboard MGCTV150-RK3318_DDR3-4bit_V1.1 dated July 07, 2011 is more common, it uses flash memory chips from Samsung and, most importantly, the popular Ampak AP6255 WiFi adapter chip. Regarding the WiFi module, Sp6330 could not find any information on the Internet.

When connecting power to the set-top box, the red indicator first lights up, which after a few seconds, turns blue. After that, the LED indicator with the clock turns on, and the image of the main menu of the interface, made in a minimalist style, appears. There is an upper notification area, but it is not active, that is, it does not advance.

In upper left corner, there are small icons – indicators of the status of network connections, and in the right – a clock with a calendar and a button to clear the memory. In the center there are large blocks of selected applications. By clicking on the plus you can add your most frequently used applications here. At the bottom there are four fixed icons for accessing the application menu, YouTube, Google Play and the settings menu.

In general, the desktop of the main menu looks nice and quite convenient to use.

Using the WallPaper system application, you can change the wallpaper on your desktop. You can choose from five preset photos or upload any of your images. A very convenient and useful feature, which is also not often found in such devices.

Using the settings (Advanced setting – System Bar Hide) you can activate the system bar – the beloved by many bottom panel with buttons, which allows you to launch including unique options that are not otherwise available.

Given that the standard remote control supports using an air mouse, using this panel is very convenient. Here, for example, by clicking on the box, you can quickly switch between running applications, the benefit of 4 GB of RAM allows you to simultaneously work with a large number of programs. Or, for example, take a screenshot at any time.

If you press and hold the power button on the remote control, you can reboot or turn off the power of the console. This option is set in the settings.

The side menu of the system settings consists of several subsections. In the general settings section, you can establish a wireless or wired connection to the network, user accounts and applications. There is Bluetooth for connecting remotes, gamepads or headphones.

More subtle settings are available in the Device Settings section, here are the settings for time, language, image and sound. The CEC (Consumer Electronic Control) function with the menu correctly translated into Russian works clearly – turns the TV on and off with the set-top box (it should be supported by the TV).

In the Advanced setting section, you can assign the desired launcher by default, assign the necessary action for the power button (OFF or SLEEP), turn on the display of the system bar, and also display the current system information on the screen – Performance Dialog, which shows the temperature of the processor including.

Of the nice features – the presence of a working adjustment of brightness / contrast / color of the image, which is quite rare in budget models.

In the Google play app store, you can select and install all the necessary applications. Google play full, not stripped down. All embedded applications work without any problems.

Using the AirScreen application – you can duplicate the image of the screen of a mobile device on a TV screen. The application works, the image from mobile devices broadcasts, but after its launch, the upper AirScreen message launched does not close in any way. You can remove it only by euthanizing this process in the settings.

The Magicsee N5 NOVA TV box is powered by the Rockchip RK3318 SoC , which consists of a processor with four Cortex A53 @ cores up to 1.5 GHz and a Mali-450MP3 GPU. In terms of architecture, the processor is similar to the Amlogic S905X.

Information from the AIDA64 application – used system components and their specifications. It is noteworthy that the processor frequency is limited to 1.1 GHz at the maximum possible 1.5 GHz. This is probably done in order to avoid overheating of the processor.

In the classic AnTuTu overall performance test, the Magicsee N5 NOVA TV box scored just 26,102 points, making it one of the outstanding among modern TV set-top boxes. All synthetic test results are compiled in our comparison table:

The results are, to say the least, low, noticeably lagging behind the consoles with the RK3328.

CPU Throttling Test surprisingly showed that with a maximum load of the processor for 15 minutes, its performance was 94% of the maximum. The temperature reached 87 degrees, which is not good but not critical. According to our screenshots, the temperature sometimes reached 90 degrees, a small radiator can hardly cope with the removal of heat from the chip.

WiFi speed in the 5 GHz band – 16-30 Mbps – is abnormally small. Apparently, the unknown Sp6330 WiFi module is to blame. To fully use the set-top box with high-quality streaming video, you need to use only a wired Internet connection.

For testing support for reproducible codecs, the console scored only 685 points: 4 not supported files and 10 with partial support.

We also tested the reproduction of a series of test videos with various codecs and bitrate from a connected hard drive:

Without problems, the TV console Box plays video with a resolution of 480p, 720p and 1080p (24fps, 30fps, 60fps), as well as 4K video with 30fps with various video codecs, such as H.264, H.265, MPEG2, MPEG4. Playback of 4K video with 60fps is difficult for the console, the processor runs to the limit. The maximum bitrate, which is comfortably reproduced by the console, is 120Mbps, which is enough to watch almost any available BD-quality movie.

To test the sound in Magicsee N5 Nova, we use a Danon AV receiver, with which you can check whether the set-top boxes support Dolby Digital and DTS sound forwarding for listening to multi-channel audio.

The HD version of  VideoBox + paired with TorrServe plays movies from torrents directly without downloading. Any selected video, including 4K, plays perfectly, except for large files weighing more than 10-15 GB.

Work with VOD services has been tested using the popular Megogo platform.

When working with Megogo, no problems were found, all videos are played with maximum quality without any comments.

Playback of TV channels using IPTV technology has been verified using the IPTV  application and an accessible playlist. Everything works perfectly.

Regarding gaming capabilities, the console allows you to play only the simplest and most demanding games. Play modern 3D games will not work, the console with low rating in Ice Storm Extreme test to 1579 points. The Magicsee N5 NOVA is not a gaming console at all.

The Magicsee N5 Nova set-top box is a classic inexpensive TV box from China based on SoC Rockchip. It does not work badly under ordinary conditions, coping with most typical tasks and has some advantages, including USB 3.0 support, a large amount of RAM and storage.

A beautiful and convenient menu with the ability to change wallpapers, a convenient remote control with an aero function and support for voice assistant, modern Android 9 Pie operating system. But the set top box is ​​also not without drawbacks.

The main advantages of the Magicsee N5 Nova is the low price with an air mouse and microphone.