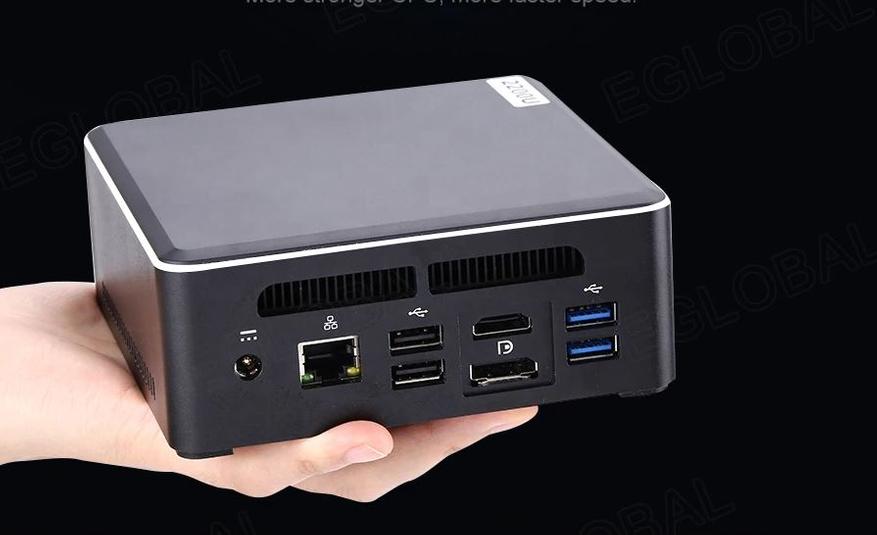 Mini-PC’s for home and office use are gaining popularity and have some advantages over classic PCs:

Previously, the world of mini-PC’s was solely dominated by Intel, but a couple of years ago there was a shift and the market was flooded with compact motherboards supporting processors from AMD. As a result, Mini pc’s with Ryzen Ryzen processors began to appear, which are good not only for their processing power, but also for graphics, which allows you to play not too demanding games.

The Chatreey S1 is a mini-computer. The nettop is interesting in a way, with its modest dimensions, there is a full-fledged desktop processor Ryzen R3 2200G, Ryzen R3 3200G or Ryzen R5 3400G inside. And if you do not need a lot of processing power, you can choose the Athlon 200GE. 2 slots DDR4 RAM up to 32 GB, support for SSD NVME drives + the ability to install an additional HDD.
Moreover, this computer is unique in that it allows you to replace the processor with another one yourself. That is, for example, you can take an Athlon 200GE and eventually change it to Ryzen R5 3400G. At the end of 2019. I had a version with Ryzen 3 2200G, which I was pleased with. There are complaints that it produces an increased noise level under severe loads.

In fact, Chatreey AN1 is a conventional name, because this mini-computer is sold under different names in entirely different stores and you need to look where it is cheaper at the moment (prices are constantly changing).

The computer has two slots for DDR4 RAM, M2 for SSD with support NVME drives, plus the ability to connect an additional SSD. A WiFi + BT modem with WiFi5 support is already installed, and if you take it with memory, then the computer will come with the Windows 10 operating system installed. Last year I had a top version of a computer-based on Ryzen 5 3550H, and I was very pleased with the computer. It is ideal for home and office tasks, multimedia, and you can even play a little. For example, GTA 5 at standard graphics settings and FullHD resolution produces 35 – 40 fps.

Another computer based on the Ryzen 5 3550H, which is an excellent processor for home and office tasks: photo processing and editing, watching HDR videos and Youtube in 4K, a browser, office applications, and accounting – all this is within his talent. The DMAF5 model has several memory configurations: 8 \ 128, 8 \ 256, 16 \ 256 and 16 \ 512. All of them have support for WiFi 6 802.11 ax. The computer can display images simultaneously on 3 screens (HDMI, DP and USB-C with support for DP mode), and a monitor mount can be found in the kit.

If the previous model does not seem powerful enough for you, then the UM700, which runs on the Ryzen 7 3750H, is probably for you. This processor has a higher maximum frequency – 2.3 GHz in multi-core mode and 4 GHz in TURBO mode (one core), due to which it has an increase in processing power of up to 10%.
It also features the more powerful Radeon ™ RX Vega 10 graphics, which will come in handy if you like to play. The rest of the set is the same: up to 32GB of RAM, SSD as a system drive + 2.5 “HDD for everything else, WiFi6 and BT 5.1 are also present.

Beast! The Ryzen 7 4800H is more than twice as fast as the Ryzen 7 3750H in today’s selection, and this is confirmed by many tests on the net. The store offers configurations with RAM from 8 GB to 32 GB and NVME SSD storage up to 2 TB. Built-in graphics allow you to play even modern games, albeit only at low graphics settings.

For example, Red Dead Redemption 2 in HD resolution produces an average of 31 fps, but GTAV at FullHD and with average graphics settings briskly runs 50 – 60 fps.

Of course, there are similar computers from well-known brands, for example, ASUS released the PN50 model, where you can choose Ryzen 3 4300U, Ryzen 5 4500U and Ryzen 7 4700U. These are powerful, low-heat processors designed for notebook computers. Together with an excellent cooling system, this means that the computer will not overheat and will work at maximum frequencies.
Of course, the most interesting is the top-end 4700U processor equipped with the new Radeon ™ Vega 7 graphics, which has 7 cores and runs at 1600 MHz. This insert is 22% more powerful than the discrete MX250, which is mostly installed in laptops, for example, the Zenbook from the same Asus. Other characteristics include Wi-Fi 6 + BT 5.0, simultaneously connecting up to 4 displays, RAM with a frequency of 3200 MHz, and Windows 10 on board. Its a bit pricey thou.

TOP NETTOPS – CHOOSING THE BEST MINI-COMPUTER OF THE GENERATION