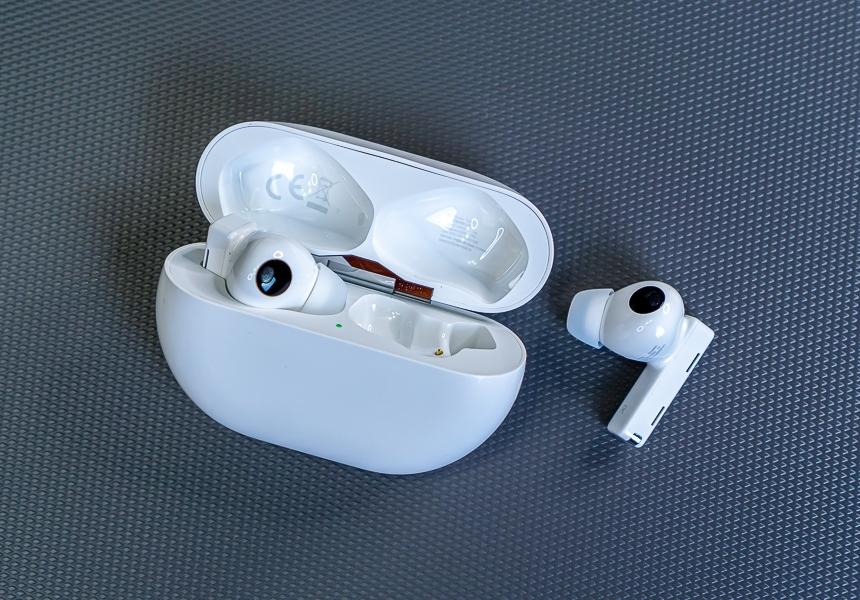 There is probably no longer a major smartphone manufacturer that doesn’t make their own TWS headphones. Traditionally, manufacturers are trying to implement their ecosystem. So if you have a Huawei smartphone, then Huawei headphones will come in handy: they instantly connect, and even with the highest possible sound quality. But let’s see how much the Huawei FreeBuds Pro justifies its existence.

The Huawei FreeBuds Pro headphones come in a rather special charging case; the dimensions are due to the extensive battery charging the headphones up to 5 times.

The earbuds themselves are relatively compact and sleek. They are somewhat similar to Apple AirPods Pro, but the “legs” of the headphones have a rectangular section, not around one.
They fit perfectly in the ears. They do not fall out, do not strain by their presence.
However, there are some problems with the design of the earbuds.
Here, on the positive side, I also want to note that you do not need to look for the correct position and doubt the chosen option when installing the speaker in the ear. Firstly, because their design is fairly obvious (unlike, say, almost all Samsung TWS), and secondly, because the application will tell you if something is wrong. More on this below.

Since the only drawback of the Huawei FreeBuds Pro headphones is ergonomics, I would like to dwell on it in more detail. Not to dissuade someone from buying, but to prepare. Well, what if Huawei engineers read my nagging and fix something in the next model. I also warn you that everything described below is a purely subjective perception, tested, however, on my wife. I have not seen any mention of the problems I have described at all in other reviews, but we all know how this can be caused besides subjective sensations.

So the first problem is how the headphone case opens. Anyone who picks up this case for the first time will try to open the cover from the side of the shiny bezel with the Huawei logo. But no, this is the backside, and the cover extends from the back.
But this is still nonsense – for the second time, you already understand what is where, and you won’t be mistaken. However, even getting the headphones out of the case is also a serious problem. Many different methods have been tried, and only one is guaranteed to work – to pick up the soft ear cushion with a fingernail. In other cases, the result is not guaranteed – fingers slide off the surface of the headphones. Of course, I also tried the method suggested by the official instructions.

And, finally, the last thing is management itself. Pause, play, accept or reject a call, change the noise reduction mode – all this is activated by squeezing the “leg” of the earphone (any) – moreover, you just need to squeeze and not just touch on both sides. But to adjust the volume, this “leg” needs to be “stroked” up or down (I think which movement increases the volume and which decreases it). Everything seems to be simple and clear and looks great on “paper”: compression on both sides eliminates accidental presses, and you can easily and quickly find the “leg”.

The only problem is that this “leg” is located between the tragus and the antigus – such protrusions in the lower part of the auricle. The headphones sit in the ears perfectly, comfortably, reliably, do not fall out – i.e. Huawei engineers clearly understood the structure of the ear well.

Huawei FreeeBuds Pro is a TWS headset with active noise canceling. Like all similar devices, headphones are stored in a plastic case, which at the same time recharges them. Noise suppression is implemented using the feedback principle – the headphones “listen” to the background noise and subtract it from the sound. The description is crude, but I think it’s clear. We’ll talk about the quality of sound and noise reduction below, and now – a few words about the companion application.

To control the headphones, there is the Huawei Ai Life application, which at the same time controls all of the company’s smart devices. The current version of the application exists only for Android and not on Google Play – there is an old version that does not “see” the connected headphones (these are the ones). The current version is offered to be downloaded either from the AppGallery branded application store, if it is installed on a smartphone, or just an apk from the site – for this, there is even a QR code on the box with the headphones.

In the application, you can change the control scheme (scheme, but not the principle!), Watch the charge level of the headphones and case, switch the noise reduction mode, but the main thing is to carry out a test of the attachment in the ear
That is, using the application, you can determine how well and tightly the headphones are worn and whether this size of earpads suits you (included – three pairs of different sizes). I don’t remember such an essential function for other headphones (any), but it’s very cool. In the end, noise reduction will not seem adequate to you if the headphones themselves pass a lot of noise.
For example, the default earpads seemed to be sufficient at first, but the application showed that this was not the case. I changed it to others from the kit, more, and it became better!

Huawei FreeBuds Pro sounds decent! Even with the SBC codec. I will immediately say that the complete set of codecs is hidden behind seven seals – I could not find official information. In some reviews, it is indicated that only SBC is supported. In others, AAC is also present. In others, even the presence of LC3 is mentioned … The latter, however, requires a connection via Bluetooth 5.2 – its headphones support, but I did not have a corresponding smartphone at hand. So let’s write down SBC and AAC. The latter, let me remind you, is used in iPhones, but Android smartphones do not support it often.

However, I repeat, and on SBC, the sound is good, perhaps, calibrated more for pop music and electronic music – the middle is slightly overstated. Precisely slightly, it does not stick out, but it seems a little more than necessary when listening to heavy music. Unfortunately, I did not find an equalizer in the proprietary application, but most player applications still have it. In the PowerAmp application, you can select the “Bass and Treble” equalizer preset and slightly lowered the low frequencies in it – so the sound of FreeBuds Pro opened up much better than the default (using the SBC codec)

The quality of the noise was quite a surprise. Perhaps, FreeBuds Pro is one of the best TWS headphones in terms of noise reduction quality. Here, by the way, there are also several profiles – for different conditions. There is a dynamic profile – something like auto-mode, and there are three profiles: for low noise, moderate and vigorous.

Of course, head-mounted headphones with noise reduction, as a rule, cope with the task better, but Huawei also turned out great – for such and such a size. In my subjective opinion, the quality of noise reduction in FreeBuds Pro is comparable to Sony WF-1000XM3 (not to be confused with WH-1000XM3, which are just head-mounted). At the same time, FreeBuds Pro “sit” in the ears much better.

In music playback mode, the headphones can work for about 4 hours with the noise suppression turned on and 7 hours without it. In this case, you can recharge both headphones five times, so the total playback time, even with noise reduction, will be about a day.
USB-C connector for charging
You can charge the case either through the USB-C connector or by putting them on the wireless charger with the Huawei logo on the shiny plate down.